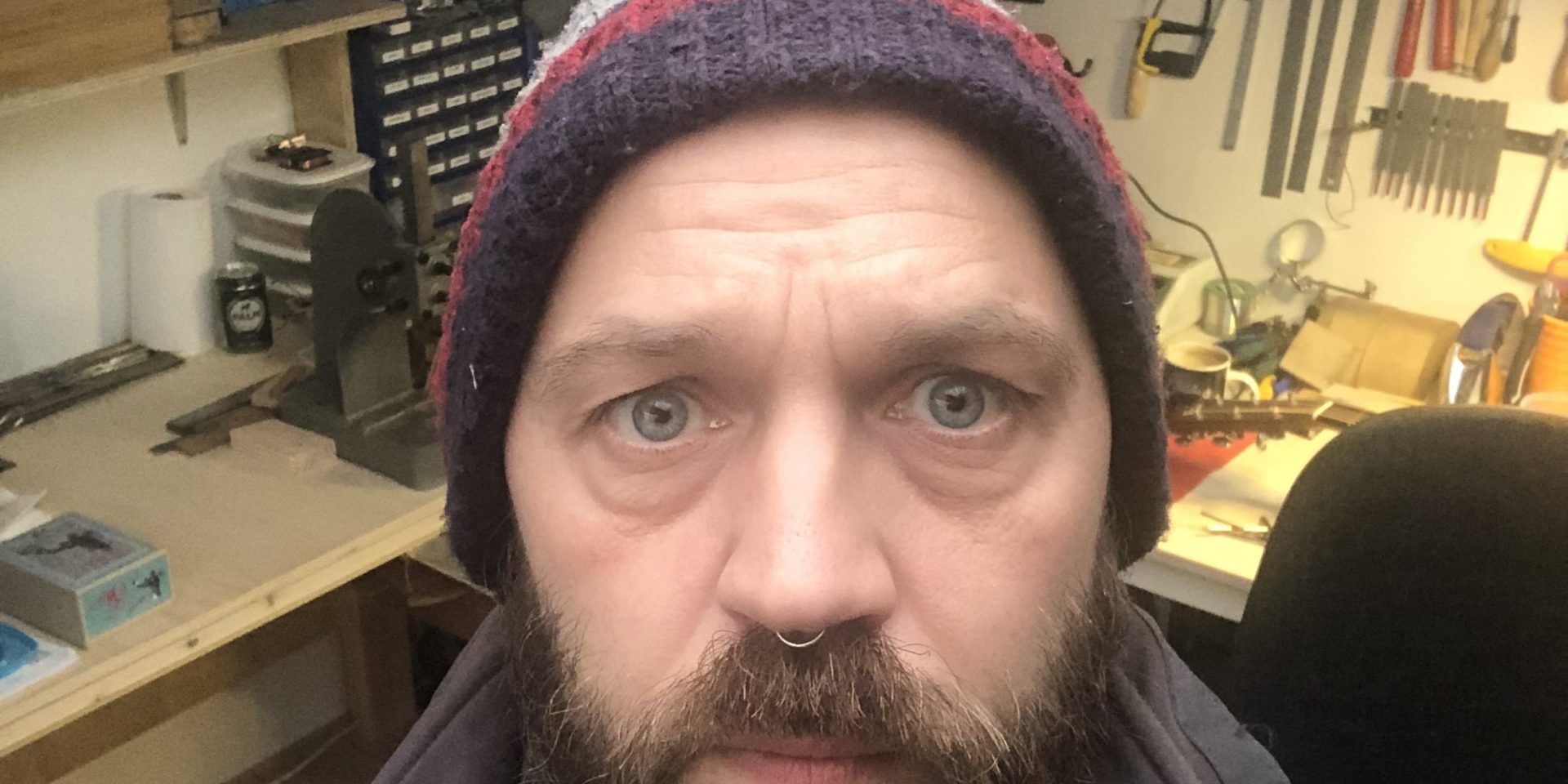 My name is Andy but everyone calls me Ozzy. It’s a nick name and it’s ridiculous but that’s another story. I’ve been messing about with guitars for over 30 years, since my brother got his first guitar. I was fascinated by the way it looked and sounded and was quickly getting into trouble for “messing about with his stuff”. After I got my own guitar I’d sit for hours not only learning how to play but attempting to discover the countless possibilities of sounds that can be achieved by either adding effects, playing the strings in a different way or place, or simply holding the guitar in front of my amp in various places to see how it affected the feedback.

I was always the kind of kid that would take their toys apart to find out how they worked, or how to modify them so it didn’t take long until I had my guitar in pieces and I guess that’s when my journey really began. I realised how interchangeable the different parts were which opened up seemingly infinite possibilities for sound, style and playability. I started swapping pickups, fiddling with the electronics, sanding the back of the neck down and when I was 16 I built an electric guitar for my school project.

Since then I’ve had countless guitars, amps and pedals in bits, either repairing, modding or building different things, discovering new skills, keeping in mind there is always more to learn. Seeking out knowledge about guitars (and everything to do with them) was what my world revolved around and I couldn’t believe that there was actually a job where the skills I had acquired could be used.

My first touring experience was with my friends band when I was about 18 or 19 and after I had done a few of my own tours I got my first real guitar tech job with 65daysofstatic. All of their gear was broken and anything that wasn’t broken soon would be due to their cavalier attitude towards guitar care or amp maintenance. Bands eh?! What this meant was they were the perfect band for me to learn how to work on the road, as there was always something that needed fixing and if there wasn’t, you can rest assured that there would be some mid performance acrobatics (or stupidity) which resulted in Ozzy having more work. I recall one occasion when, during line check for a festival one pedal literally fell apart and was unusable. Unfortunately this was crucial for the set so I had 10 minutes to figure out what was wrong and how to fix it. Luckily (for me) the switch had broken and I had a spare which I swapped out and the band went onstage bang on time. Yay me! Other bands I have since worked for include LCD Soundsystem, Mogwai, Franz Ferdinand and Wild Beasts (amongst others) and I am still actively working today.

This job has allowed me to travel the world, working in different venues from small pubs to arenas. I have had to deal with the worst rental backline you can think of and the best. I have stage managed people I don’t know, whose language I don’t speak and I have witnessed rock and roll antics and some of the most amazing shows, moments I know that will stay with me forever. Through all of this the one thing that has stayed in my head is that no matter what, a gig WILL happen. No matter what, I need to make it work. Whether that be a broken pedal or the fact that all of the gear won’t physically fit on the stage. That being said, once the gig does happen it doesn’t mean an amp won’t spontaneously combust or a tuning machine won’t fall apart or the drummer won’t fall of the riser. I have had to learn to be ready for anything.

Whoever I’ve worked for, whether they be very successful or relatively unknown, what I believe is a core skill is having a personal approach, always listening and keeping the artists view or tonal nirvana as your primary goal rather than what you might think is the best. It can be tricky. That doesn’t mean you can’t give advice or make suggestions but I always try to keep in mind what it is that may have influenced who you’re working for rather than who influenced you. I’m often asked what’s the “right” way to do things? Whether that’s what order pedals should go in the signal chain to which strings to use. The answer is whatever works, there is no “right” way. I think this approach  helps to reenforce a Saville Row feel to the work I do rather than something that is off the shelf.

As I suggested earlier I am constantly looking for new things to learn with regard to the guitar world, mainly centred around amp design and guitar building at this time. I carry out all types of guitar maintenance and build pedal boards. I have recently moved my workshop from my home out to the Peak District. Here I hope to tackle bigger and more interesting jobs.

About Us
Booking Info & FAQs